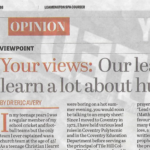 Eric Avery wrote an article that was carried across the Kenilworth Weekly News and Leamington News on Friday 6th December 2019, six days before the 2019 General Election.

Click on the image to see the scan from the newspaper or click below to read the original.

Our leaders could learn a lot about humble roots (see Footnote)

In my teenage years I was a regular member of my school cricket and football teams but the only team I ever captained was a Church team at the age of 45!  As a teenage Christian I learnt the importance of discipline and relating to young people through volunteer youth work at schools in Liverpool and later in Birkenhead.  I suppose that I honed my communication skills in many churches on Merseyside. I never had any problems preaching to passive adult congregations (I guess at that time I spoke at very few were Pentecostal churches!). But my communication skills were developed through holding the attention of youngsters in a wide range of church halls or being the youngest member of a team talking to children in various streets of terraced houses near Anfield seated on a tarpaulin sheet.  If you were boring on a hot summer evening, you would soon be talking to an empty sheet!

Since I moved to Coventry in 1972, I have held various lead roles in Coventry Polytechnic and in the Coventry Education Department before serving as the Principal of Tile Hill College (THC) for 18 years.  In addition I have undertaken various leadership roles at Canley Community Church (CCC) for many years. So you would need to ask former colleagues at THC or the congregation at CCC if I am qualified to write an article on leaders!

The Bible makes many references to being led. Two of the best bits of the Bible known by most KWN and Courier readers contain a reference to leading.  Firstly the Psalm that begins with “The Lord is my shepherd” states that “he (the Lord) leads us beside quiet waters” (Psalm 23v2). Also in the Gospels the Lord’s Prayer contains the request “Lead us not into temptation” (Matthew 6v13).  In one of the favourite readings used at many Christmas Carol Services, a reading from a book written by the Old Testament prophet called Isaiah likened the promised Messiah to a shoot, a stem, a root and a branch, reveal that this Messiah will in a future day establish a kingdom “where the needy will be judged in righteousness and with justice he will give decisions to the poor“ (Isaiah 11v4) and that “a little child will lead them”(v6).

While many of the recently-published political manifestos include claims that their leaders are faithful (or trustworthy) and have and will provide for the needy and the poor, I do not think many of them would wish to be pictured in their publicity as a shoot, a stem, a root , a branch” or as “a child”. Yet the Son of God was born to humble parents far away from their home village in a wayside inn with no spare rooms in an out-of-way town in the company of cattle and oxen, cradled in a feeding trough and worshipped by despised shepherds. Paul tells us that this humble birth was because he humbled himself and became a servant (Philippians 2).  Perhaps we as well as church leaders could be better examples to politicians and business leaders because we are ‘in the know’! How come? Again to quote Paul’s word to the Corinthians (and they were a rum lot!) “You know the grace of our Lord Jesus Christ, that though he was rich, yet for your sakes became poor so that we through his poverty might become rich” (2 Corinthians 8 v 9).

Footnote: The heading submitted by the author, “Can we trust our leaders” was revised by the Editor.

This article was written by Dr £Eric Avery with help from Neville Hunt.  Dr Avery has lived in Kenilworth for 45 years

This site uses Akismet to reduce spam. Learn how your comment data is processed.